As a child, I loved my LEGO, spending hours creating huge towers and complex structures. Now, as a parent, I enjoy watching my children get the same satisfaction out of this wonderful toy (I even still do some occasional building myself!).

Over time, the variety of products on offer from LEGO has expanded greatly. As a child, I mostly had just the basic blocks to craft my own creations. However, now the emphasis is on sets with special pieces that make a particular vehicle or building. There are even themed sets, such as Harry Potter or Star Wars.

What has not changed, however, is the shape and function of the basic brick - a cuboid with circular projections on the top and corresponding recesses underneath that allows bricks to be connected together. This concept was the subject of a patent application filed over 60 years ago. While the patent has long since lapsed (patents generally expire after 20 years), the brick has not required any re-inventing.

LEGO has sought to protect its intellectual property in other ways too, notably through trademarks. While they have struggled to obtain trademark protection for the 3D of their bricks, notably in the EU, they have had more recent success in protecting the 3D shape of their distinctive mini-figures.

Sixty-two years ago today on January 28, 1958, Godtfred Kirk Christiansen submitted a patent application for a toy building brick which was approved six months later. That patent for his “highly sophisticated inter-locking brick system” has since led to LEGO becoming one of the largest toy companies on the globe. 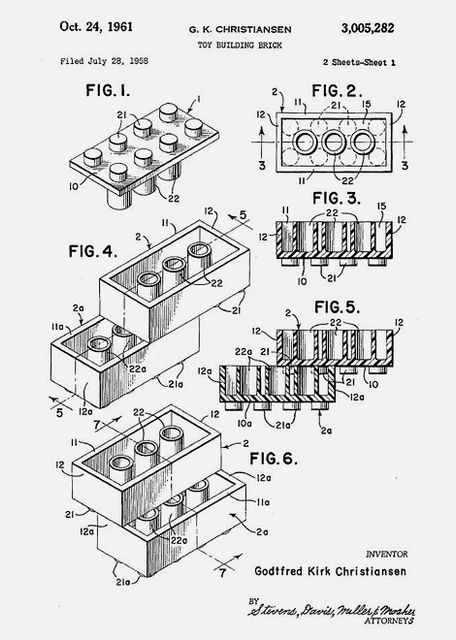