Copyright, contrary to trade mark rights, is not of indefinite duration but ends, in most countries, 70 years after the death of the author. Trade mark rights can be renewed every ten years, so that they can last indefinitely, as long as renewal fees are paid.

The possibility of registering artistic work as trade marks, in order to obtain longer protection after copyright protection has run out, seems like a clever strategy for owners of works of art or museums that hold them. It is not as easy as it seems, though.

In a case earlier this year (Case E-5/16, Decision of 6 April 2017 http://www.eftacourt.int/uploads/tx_nvcases/5_16_Judgment_EN.pdf), the EFTA court ruled on this topic, upon a request by the Norwegian Industrial Property Office (NIPO) for an advisory opinion from the Board of Appeal on the interpretation of Art. 3(1)(b) to (f) Directive 2008/95/EC.

The Municipality of Oslo had applied to register several trade marks that consisted of depictions of works of art by Norwegian artist Gustav Vigeland, all of which were out of copyright because the protection period had run out. NIPO's Board of Appeal sought advice from the court regarding the criteria and circumstances that might be relevant to a refusal of such applications. The EFTA court clarified that, in principle, nothing prevents a sign from being protected under both trade mark and copyright law, because trade mark law does not make any distinction as to the legal nature of a sign that can constitute a trade mark and because both rights have different purposes.

Nevertheless, it also pointed out that the lapse of copyright protection after a determined period also serves the principles of legal certainty and the protection of legitimate expectations that, after that period, the creative content can be used without limitation. Once a work is in the public domain, there is no longer individual protection for that work, which is why several criteria have to be met if such work is to be protected as a trade mark, with the consequence of a potentially everlasting exclusivity.

Firstly, the work must fulfil the essential function of a trade mark, namely to guarantee the identity of the origin of the marked product, so that the consumer is able to distinguish the product or service from those of others, without any possibility of confusion. The essential question is, does the consumer perceive the artistic work as an identifier of the artist or of goods and services from a different entity?

Secondly, the work should not be required to remain available for general use. According to the court “certain pieces of art may enjoy a particular status as prominent parts of a nation’s cultural heritage, an emblem of sovereignty or of the nation’s foundations and values. A trade mark registration may even be considered a misappropriation or a desecration of the artist’s work, in particular if it is granted for goods or services that contradict the values of the artist or the message communicated through the artwork in question. Therefore, the possibility cannot be ruled out that trade mark registration of an artwork may be perceived by the average consumer in the EEA State in question as offensive and therefore as contrary to accepted principles of morality.”

Based on the guidance of the EEA court, NIPO applied those principles and rejected the trade marks, considering Vigeland`s work to be part of the Norwegian cultural heritage and not protectable by one single entity.

The German Patent Court had taken an identical approach when deciding on the registration of a depiction of the Mona Lisa (decision of 9 December 2015 – 26 W (pat) 508/15).

The reasoning of the EFTA court and the conclusion drawn from it by the Board of Appeal of NIPO should not mislead those who were speculating that artistic work such as the image of Mickey Mouse would soon be in the public domain and, therefore, the question of trade mark rights would be raised (s. comment section on a prior blog post on that topic http://ipkitten.blogspot.com.cy/2017/04/can-public-domain-artwork-be-registered.html)

Apart from the fact that work of art, especially in the entertainment industry, is usually already protected by means of one or more registered trade marks following its creation, or at least before copyright lapses, such artwork also differs from works of fine art, because the former is usually associated with the company commercializing it, rather than with a single artist. Furthermore, such works of art are not considered common cultural heritage, as they have been a product of commerce of one single entity right from the beginning.

A comparable question that was not raised in the case of Vigeland´s work, but which would have arisen if the artistic work had qualified for registration, would have been when, and to what extent, the use of artistic work is considered trade mark use. According to current case law, the use of figurative elements or depictions deemed to be for decorative purposes, is not considered trade mark use (e.g. German Federal Court in I ZR 175/09). This is relevant not only in terms of maintaining a valid trade mark registration, but also in the evaluation of infringement cases, because if a figurative element is used merely as a decoration and not as a trade mark, its use cannot be considered an infringement.

Consequently, artistic work faces not only the hurdles of distinctiveness and morality if it is to be registered as a trade mark after copyright protection has lapsed, but once registered, also needs to be used as a trade mark, in order to remain valid.

First, “both the artist Gustav Vigeland and the Vigeland space (park and museum) must be considered as belongings of the Norwegian cultural heritage”. Secondly, granting the trade mark registrations would amount to granting someone (the Oslo municipality) a competitive advantage over third parties without having contributed to the development of the trade marks thus obtained.” 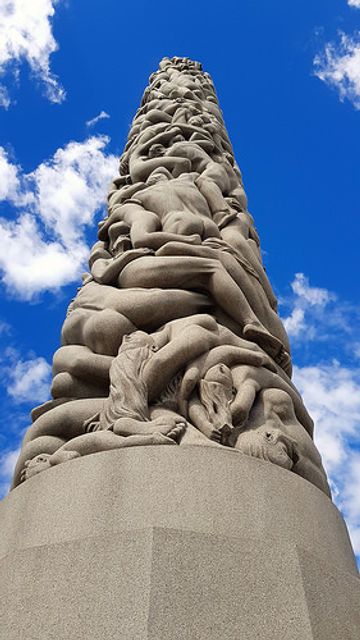