Air to air re-fuelling is a standard technology for military aircraft. Wireless inductive charging, e.g. a pad for cars or smartphones, is increasing in prevalence. In fact I have drafted a patent application in this area recently.

Amazon has now combined these two ideas in their patent for a drone that is able to charge a car wirelessly, which was granted earlier this month. So no more worries about finding the nearest charging point for your electric car, simply summon a drone to charge it up, even while you continue to drive along!

Amazon has clearly been investing in drone technology for a while now, primarily aimed at delivering packages using drones, so this latest patent appears to be spin-off from this effort. With any patent, there is no requirement for it to be associated with a commercial product, so it is not clear whether Amazon has such drones ready to release for action or they thought it was technology worth protecting for future use.

Hold on, you might say, how have they managed to get a patent granted for this drone, if air to air re-fuelling is known and wireless charging is known? Good point! Inventive step, one of the criteria required for a patent to be granted, is subjective, and depends on the exact features outlined in the claims of the patent application, as well as the exact disclosures of previous ideas (the "prior art").

For Amazon's patent, their claim is limited to the particular features of the drone wirelessly authenticating the vehicle to be charged, assessing the speed of the vehicle and determining the docking speed of the drone, and then wirelessly charging the vehicle. At least some of these features are specific to the challenges of wireless charging using a drone, so it is likely that Amazon was able to show that these features were not disclosed in the prior art and thus their patent claim possessed an inventive step.

There’s a lot that seems crazy about this patent, however – including the fact that drones themselves require a lot of tricky power management to get even limited flight times with lightweight cargo on board. Keeping themselves charged and within range of vehicles in need of a top-up might be the most challenging aspect of the idea overall, in fact. 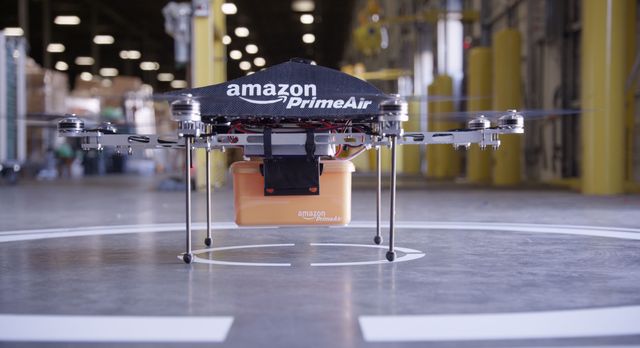 Top story: Amazon patents a drone that delivers a charge to power up EVs on the… https://t.co/KQ2p4lRwgK, see more https://t.co/yWWd5bWrnC

#Amazon acquires patent to use #drones as a way to charge #EVs. https://t.co/Mv3V0z5EYV #ElectricVehicles #ElectricCars pic.twitter.com/LZ5ZGluMPA

Amazon Gets Patent on Drone to Charge Electric Vehicleshttps://t.co/JgW0mrlFwX pic.twitter.com/TRZvSI4m9x