The new £1 coin has been released today, complete with a "secret" security feature that, in addition to a number of visible security features, makes the coin even more difficult to counterfeit.

Since the new coin was announced over two years ago, this secret security feature has also been described as being "patented". I am always sceptical when reading this because it often just means that a patent application has been filed (as patent attorneys we reserve the term "patented" for meaning that a patent has been granted, which may take a number of years). Patent applications normally publish after 18 months, so the "secret" and "patented" feature should be publically available. Also, surely this feature needs to be known to at least some people, so that the counterfeits can be spotted, otherwise how is anyone going to know whether they have a genuine coin or not?

Having these curiosities, I set about trying to find what this patented security feature could be. Sure enough, the Royal Mint Ltd filed a number of patent applications in 2010 and 2013, some of which have now been granted. The patent applications are directed to the embedding of luminescent particles in a plating layer on a metallic substrate (e.g. a coin blank). These luminescent particles have a characteristic emission spectrum when they are illuminated with light. This spectrum can then be checked, e.g. by vending machines, to confirm that the coin is genuine.

Of course, the "secret" and "patented" features may not necessarily be one and the same feature...

What could be secret, for example, is the particular type of luminescent particles that are being used in the coins, so it may not be commonly known what the luminescent emission spectrum to look for is (though this should be relatively straightforward to test with the right equipment). The particles may also be embedded in a certain pattern in the coins, which can also be detected.

In any case, a lot of time and effort has gone into making this coin one of the most counterfeit-proof coins to date, and I look forward to having one in my pocket!

It is thought to involve material inside the coin itself which can be detected when electronically scanned by coin-counting or payment machines. But officials at the Royal Mint have not released any further details. 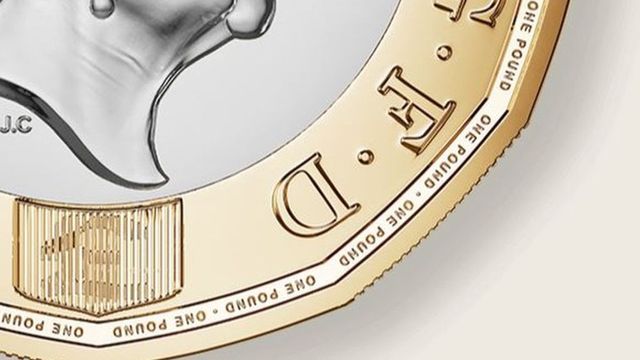 Quids in? The new 12-sided £1 coin comes into circulation today, with a hidden security featurehttps://t.co/bCBSaDYoAQ pic.twitter.com/W8y1EvvSr9

The new 12-sided £1 coin will enter circulation tomorrow, replacing the old round version after 30 years https://t.co/hleBU5PXfX

The new £1 coin has arrived! Find out where you can get your hands on one: https://t.co/7t7ZML05o2 #poundcoin pic.twitter.com/JfWWQ3G7IL