Apparently, some people’s love for hamburgers and hotdogs forces them to make agonising choices. This was the inspiration behind the widely publicised new product, the hamdog, in which a handily-shaped bun neatly accommodates a meat patty and a sausage at the same time.

Recent headlines have reported that the hamdog has been “patented” in the US. Is this really true and does it mean that people are not free to commercialise their own verson of hamdogs (should they wish)? Well, no. The people behind the hamdog have not patented the simple combination of a sausage bun and a hamburger bun. The hamdog is not a patented invention; instead, the appearance of the bun has been protected by something called a “design patent”.

Despite its name, a design patent is very different from what we normally mean by the term “patent”. A “design patent” is a type of protection available in the US, which is akin to “design rights” available in most other countries. (To avoid confusion between “design patents” and standard patents that protect inventions, the latter are also referred to as “utility patents” in the US).

A “design patent” or design right protect the way something looks, not the way it functions, so it can be a useful form of protection if you have an idea that primarily relates to the appearance of a product. Design applications can be fairly simple, as illustrated by the design patent relating to the hamdog, D584478.

We suspect that the hamdog is unlikely to bring in the franchising deals that its maker is looking for, particularly as there has been no mention of any design rights relating to the hamdog being in force in Australia, where he is based. Nevertheless, design rights can provide very valuable protection for certain new designs, so if you have a new idea on how to improve the look of a product, don't forget to consider design protection.

An entrepreneur in Australia is hoping to make plenty of dough after inventing the "Hamdog". Mark Murray has successfully patented and begun selling a sandwich that is a cross between a hotdog and hamburger. 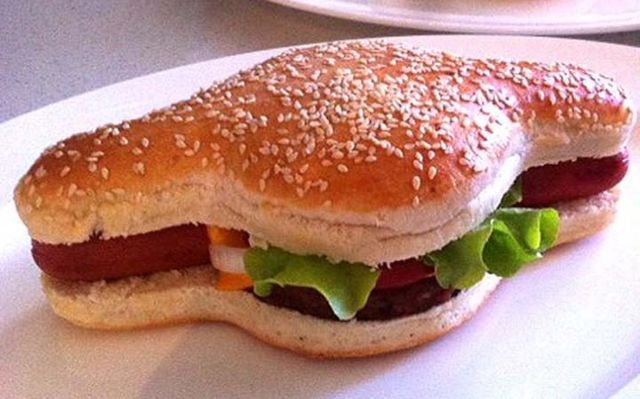 We live in a world where a 'Hamdog' burger hybrid is patented https://t.co/JBWNq3ScdW

A Silly Innovation That I Want to Eat: The Hamdog -> https://t.co/zeHPyczwMG #design